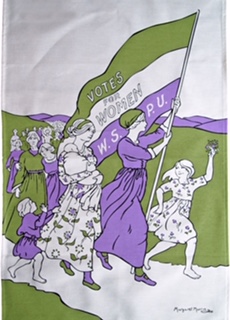 I’m being decidedly topical this week – the impending General Election in the UK next week, the current strikes in France, the ongoing criticism of Donald Trump in the USA…. what could be better than interviewing a homeware & giftware brand that has been inspired by radical thinkers throughout global history? Designing tea towels, aprons and other paraphernalia on topics such as democracy, the NHS, the Welfare State, Free Speech, Free Love, Votes for Women…. in fact, every topic done designed for those radical left and liberal minded people to proudly display their political and social beliefs. To find out more, I caught up with co-founder Bea of The Radical Tea Towel Company …..Hi Bea…

Hi! I’m Beatrice and I am a co-founder of The Radical Tea Towel Company.

Who or what inspired you to create the Radical Tea Towel Company?

It was May 2011 and I was looking for a birthday present for an elderly relative who was into left-wing and radical politics. His sight was poor so a book was not an option. I decided something practical like a tea towel with a political message on would be a great idea but, despite googling for over an hour, I simply couldn’t find one anywhere.

History & Politics abound in your range of Radical Tea Towels – how do you pick your design topics – do get ideas from customers, from what’s trending on social media?

It’s a combination of those things: customers do make suggestions all the time and we add the best ones to a list which we review each January. We also think about topics that are in the news, for example in 2015, when the refugee crisis was at its height, we produced our Refugee tea towel with the quotation by Emma Lazarus from the Statue of Liberty.

Which topic/ tea towel has attracted the most attention so far? Have you got a personal favourite?

It’s probably the ‘Women’s March’ design.  It was based on a design by Margaret Morris for the song sheet of Ethel Smyth’s suffragette anthem “The March of the Women”.

My personal favourite is the  ‘Rosa Parks’ design which shows her sitting on the bus in the run up to the Montgomery bus boycott just before refusing to give up her seat. What an inspirational woman!

Although you are based in South Wales, are your tea towels available overseas?

Yes! We have websites in the US and Canada. but we get orders from all over the world!

Obviously the tea towels can be used as tea towels, but some people have had them framed like works of art and even some have used them as ready made banners for activists at rallies. Where was the most unexpected place you’ve spotted your tea towels?

I have 3 great examples!

A customer sent in a brilliant image of our ‘Women’s March apron’ hanging on a balcony in Galicia on International Women’s Day as part of a defiant protest for women’s rights. It’s a tradition in Spain to show you are on strike!

Another one sent in an ‘LGBTQ tea towel’ from the McMurdo Station in Antarctica. The temperature was minus 40!

And then Jeremy Corbyn brought out a ‘Tony Benn tea towel’ and read out the quote about hope on it at a speech he made to his supporters at the Sanctuary Pub following his September 2015 leadership victory!

Have you always had a career or a hobby in the homeware/giftware sector in the field of designing, marketing etc?

No! I was a languages teacher for most of my working life! This business was a completely new departure for me!

Personal now – what outfits and shoes would you normally be found wearing?

Jeans and stripy tops with a gilet and leather ankle boots.

Do you have any favourite shops or online sites ?

Boots. I find them very comfortable and they keep my feet and legs warm and dry in wet Welsh weather!

Thank you Bea! There you go readers, if you’re stuck for ideas for gifts, for whatever the occasion, for that radical person in your life …. or if you yourself are a loud and proud radical, why not get yourself a tea towel or two!

If you love boots, shoes and fashion, come on in..